Anti-stress foods can save your life during the World Cup - Stress of fans can lead to high incident rates of heart attack: 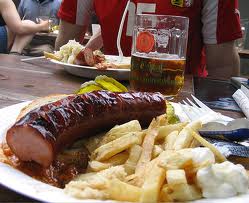 During World Cup seasons football fans gear up to watch the games. Being at the stadium or in front of the television, the heart of fans fire at every shot during the game — this, according to researchers, increases the risk of having a heart attack during championship games.


A study conducted in by researchers of the Ludwig-Maximilian University of Munich during the 2006 World Cup examined the occurrence of such strokes. Results showed that on days without games between 9 and 22 cases of strokes were observed. The first match of registered 44 cases.
Studies point to one case of sudden death to about every 580 000 football spectators.

Cardiologists explain that heart attacks are caused by a release of stress hormones. In aggressive situations the body releases adrenaline which can cause the disruption of a plaque. Adrenaline increases your heartbeat and promotes vessel constriction, raising blood pressure. That is why strong emotions, such as those during a football game, elevate the risk of arrhythmia (instability in heartbeat) and sudden death (the heart stops beating due to some blockage in the artery).

Increased intake of saturated fat from foods such as French fried potatoes, beef fat, pork, cheeses and salty foods when accompanied by stress, physical inactivity, alcohol and coffee consumption, and smoking can increase the risk of cardiac attacks.

It is time to change our eating habits and lifestyle to a healthier and less stressful one by including the below in our diet:
-     Spinach, soya, pistachios, walnuts and almonds, which are rich in magnesium which defends the body against stress

-     Chick-peas, milk, bananas have tryptophan, an amino acid that boosts serotonin, the hormone that induces sleep and transmits wellness

-     Passion fruit, celery, cucumber and lettuce have a calming action, and fight insomnia

And most importantly: Supporters should change attitudes about football. Sport is not war. Defeat is part of the game and life goes on...

Email ThisBlogThis!Share to TwitterShare to FacebookShare to Pinterest
Labels: stress