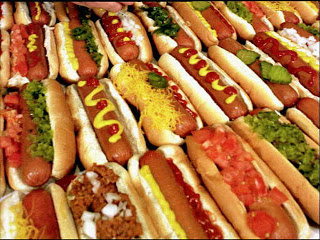 Eating processed red meat and red meat in general, like hot dogs and hamburgers, on a regular basis can lead to type 2 diabetes, according to a new study from Harvard University.

Results from studying more than 200,000 people over 20 years showed that eating one serving of processed meat, such as hot dogs, bacon, salami or bologna, regularly or daily can increase the risk for type 2 diabetes by 50 percent. Even regular consumption of unprocessed red meats like hamburgers or steak led to a 20 percent increased risk.
"Many previous studies have shown the link between processed meats and diabetes, but this is one of the first large studies to show that unprocessed red meat is a significant risk factor," lead author Frank Hu of the Harvard School of Public Health told USA Today.
Processed meats are high in sodium and nitrites, which contributes to an increased diabetes risk. Red meat, which is loaded with iron crucial for the blood, can raise the risk for diabetes if too much iron is consumed, according to Hu, who also believes there may be more contributing factors.
"Clearly, processed meat is much worse than unprocessed meat for raising the risk, but unprocessed red meat is not benign," Hu said.
The study, published in the American Journal of Clinical Nutrition, also noted that substituting one serving of nuts, whole grains or low-fat dairy each day can lower risk for type 2 diabetes between 16 and 35 percent.
The Harvard researchers analyzed diet data from 442,101 individuals, adjusted for factors like age, general health, lifestyle habits and diets.
Type 2 Diabetes, the most common type of diabetes when the body does not produce enough insulin, affects millions of Americans, especially the overweight. Its complications can range from urinary tract infections, to atherosclerosis, stroke, blindness and death.
Hu recommends minimizing consumption of red meats, processed and otherwise, and replacing them with a serving of nuts, whole grains or low-fat dairy like yogurt.
"It's a very important message, given that diabetes is rising very rapidly and consumption of red meat, including both processed and unprocessed, is very high," Hu told The New York Times.


This article is copyrighted by International Business Times, the

Email ThisBlogThis!Share to TwitterShare to FacebookShare to Pinterest
Labels: health